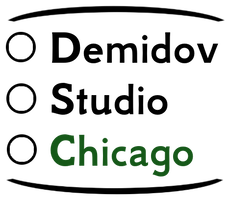 WHAT DO WE DO?
WHATEVER WE WANT.

There are certain expectations that both actors and the audience have of modern theatre.  Actors are to put on a well crafted, solidly thought through, committed, consistent performance each and every night.

The Demidov school encourages you to try less effort.  By letting go - far more than a typical actor would dare - you let your creativity take the wheel.  By trusting your own perception and, moreover, your own humanity, a dynamic performance takes shape on its own.  The audience hungers to know what comes next - because the actor hardly knows themselves.

Isn't that theatre worth seeing?

SERIOUSLY, THOUGH.
WHAT DO YOU DO?

The Demidov Organic Technique cultivates artistic freedom and faith in self though semi-improvisational text etudes.  By nurturing calm, boldness, and clear sight, the actor becomes a collaborator in the creative process rather than mere fact-finder, or worse, marionette.  The actor learns to discard doubt and trust that what they want in the moment is valid.  The actor learns to accept that, in life, there are always unknowns, and the stage is the same.

Further, Demidov conceived a set of 'actor's scales', much like a concert musician has scales.  These scales are daily practice unlinked to script or character that cultivate the reflexes and sense of freedom that carry an actor through the creative moment.

These two avenues give the actor everything they need to facilitate their growth as feeling, reacting beings.  They are bottomless exercises that will consistently reveal something new to the actor who dives in.  They draw not on an actor's ability to think very hard about a role, but on the actor's humanity, which is what the public pays to see, after all.

I UNDERSTAND.
BUT I THIRST FOR MORE INFORMATION!

Be sure to browse the Curriculum page for a more in-depth breakdown of topics.
Or: let's talk!  Hit me up at demidovchicago@gmail.com - I want to meet anybody who read this far!